I can’t believe it’s almost been two months since we’ve arrived in Malawi! Time has FLOWN by. Since the excitement of the first week, a lot has happened and we’ve been discovering lots of neat components of life in Malawi. Below are some of the highlights, in somewhat-chronological order… 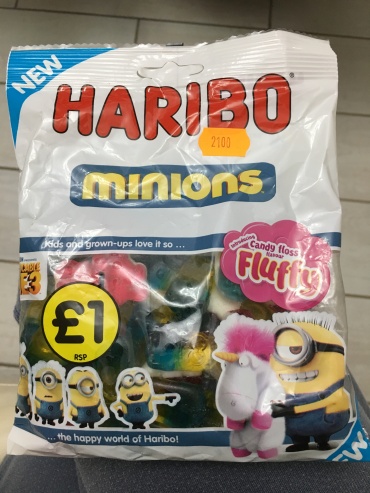 A dish from one of my favorite restaurants, Lark!

Even though I’d been fully comfortable with driving in South Africa, I knew I needed to slightly brace myself for driving in Malawi. The roads are less developed; any manner of cars, bikes and/or animal could veer into your lane or cross the road unexpectedly (case-in-point, I saw a vervet monkey bolt across the road last week near Jon’s office); and there aren’t ‘map-able’ addresses for most homes so you have to either get a ‘pin’ sent to you or follow the ‘turn right at the third roundabout, left at the T and it’s the second driveway’ rule of navigating. (Also, I’ve noticed people selling live chickens, puppies and guinea fowl on the road so I have to train myself to not look at them. Apparently, continuing to cry after I see that won’t stop it from happening… Blech.) So, in the first five minutes of my first solo drive, after navigating all of the other things I mentioned, I got stopped at one of the common police checkpoints and was questioned about our expired ‘Certificate of Fitness’ (i.e., inspection certificate), which Jon was in the process of updating. (You see, the registration said the car was gold and the COF said it was white, so… Problems.) Luckily, after calling Jon with the cop listening, he let me go. The power of being male (& white): 1, women everywhere: 0. [EYE ROLL]

We’ve also had some fun navigating the power situation. The power company, ESCOM, releases a supposedly-accurate schedule of the daily power outages but Jon told me to not take any of it to heart. Apparently, it’s never correct. But, we have been able to ascertain that the power either goes out at 6:00 am-ish, 11:00 am-ish, or 3:00 pm-ish. (With an ever-welcomed burst of it turning on and off for two or five minutes, every seven minutes, for an hour or so in the evening. Why?! I haven’t the foggiest…) Luckily, our generator got fixed, so we try to constantly keep it full by filling our jerry can with petrol at the station and keeping it at the ready at home. (I didn’t know what a jerry can was but, apparently, it costs $30…)

The house has also been coming together! We got our shipment from South Africa and happily unpacked it. (Also, we were very confused how it didn’t take two months to never, so a win for us!) We enjoyed the little surprises we left for ourselves like our fancy salt grinder, chai tea and a TV (but without the power cord – somehow that got lost…?). We had some people over to watch March Madness – don’t get me started on the results – and used a combo of the generator, no A/C nor fan (to make sure the generator doesn’t get overpowered), switched between Wifi and cellular data since either decided to just stop working at any moment, and watched the games on NCAA.com with a VPN. Woah. We’ve also had people over for board games, generator-powered, of course, and generally try to keep ourselves busy in creative ways. For one, Jon has taken up needlepoint, an homage to his late grandmother. Also, we have a massive board game that Jon got when we were home in December that we’ve started to play. (It’s SUPER nerdy, but fun.) There’s also coloring, Netflix downloads, etc. (We had an awesome flood in our house that filled the bathroom and kitchen with water and involved Jon and I pushing the water out of the back door with a mop and a hand squeegee. Fun times…) 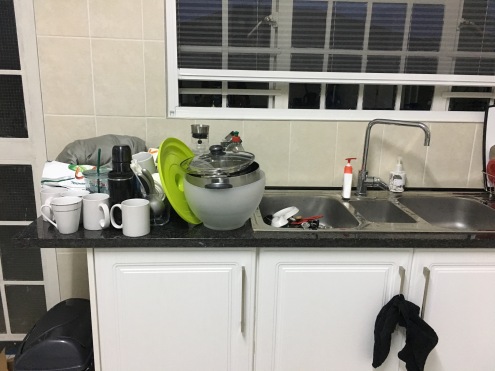 Dishes to wash from the shipment… 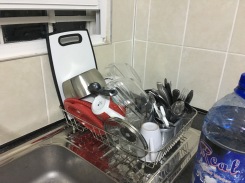 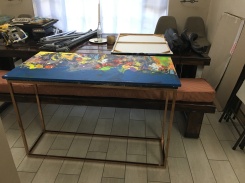 Where to put everything?!

We tried to make as much room as possible!

Our room – a disaster zone.

So… This works as is, right? 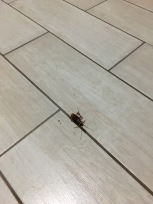 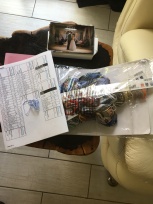 It’s going to be lovely.

We’ve also been trying to spend as much time as we can with the new friends we’ve made – it’s been awesome to meet so many great people! We kicked it off with the annual Lilongwe St. Patty’s Day party, a huge event! We watched a performance by our friend Maria’s band, danced to the music of a band that was flown in from Ireland, we drank Guinness, I ate a hot dog (naturally), we saw good Irish dancing (go Fran!) and more! (We even had some friends in town from South Africa, so they went to the party, too!) We also found the ‘Alley 26’ (for you Durham folks) of Malawi. It has drinks with hibiscus, rose petal, egg whites, etc. Very nice! (But not cheap…) We even went to a Passover seder which was great – easy-going, quick, nice people, entertaining (the kids there put on a skit) and (did I already mention?) quick. We’ve started joining more consistent groups for things like quiz night, board games, ‘Poker for Dummies,’ exercise classes, frisbee, etc. Just delightful – it’s been a great two months!

Dinner with our visiting friend, Ilija! 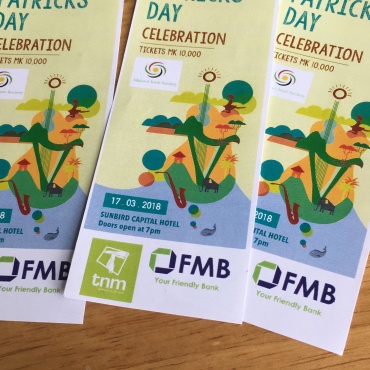 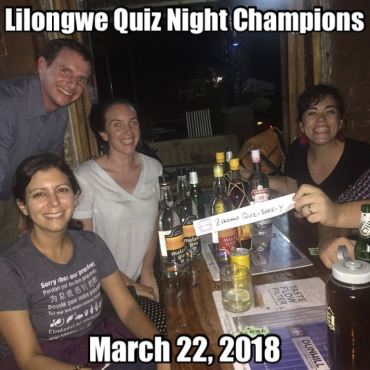 p.s. We actually just arrived in South Africa (transit stop) to kick off a long trip that will be filled with lots of family, friends and great food. (Disclaimer: the itinerary for this trip is ridiculous, I’m fully aware…) Look out for blog posts on our trips to Italy and Israel and my trip to the U.S. What a life this is!