Phew! DONE! My two eight-week summer courses (biochemistry and physiology) are complete!! It was a pretty exhausting period because, as I discovered with a rude awakening, I am no longer 20. I’m not even 22. They started off with a bang after missing a day (due to our Mauritus trip): I sat down to read the syllabi for these courses (as they weren’t available before we left) and mapped out the semester, quickly realizing that I would be studying every day, all day. So, I would have to work hard to get back into ‘school mode,’ and that I did. I would wake up around when Jon woke up for work, have breakfast, study, have lunch, study, have dinner, study & then go to bed. 7 days a week. Now, I was able to enjoy a little television with my meals, which is what kept me sane, I think. (Also, a daily tea break in the afternoon, coupled with a Twitter deep dive on what I’d missed. And let me tell you – with the way Washington has been this year, it was always a lot. That undid the sanity-rebuilding that catching up on “The Good Fight” provided but I think it was still a net positive. Please direct all verification questions to Jon Crisp. Or, better yet, Jack Crisp…) 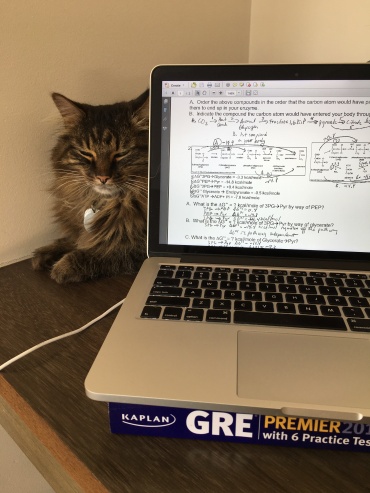 Studdy buddy #2 – a little more intrusive but provided a good excuse for a cuddle break!

Also, I discovered that not having had a smart phone in undergrad (and barely using the simple cell phone I did have at the time) was a way different school experience than what it’s like now. I literally had to put my phone on the other side of the room or in another room to avoid the temptation to look at it when a professor went on a mindless tangent or a clicker question** was being conducted. Not because I look at my phone all day but because it’s so easy to just scan it, send a quick text, see what crazy nonsense DJT just tweeted, etc. (Also, since my phone is my main way to keep in touch with people in the U.S., I worried I’d feel isolated not having it.) But, alas, Twitter managed to survive, friendships remained intact and the “This is Us” episodes I had stored on my DVR were saved. (Mostly because I asked Jon to delete the “Shark Tank: South Africa” episodes that we were never going to watch…) I also discovered that my organizational skills haven’t waned and that is an important skill to have when taking classes in the summer (which I’d never done), since it’s a condensed semester.

Now I’ll just await my scores, hoping they’re enough to be competitive so these courses will count as some of my pre-requisites for PA school. I’ll also prep for the next class I can take (microbiology) in January 2017. (I’ll be able to buy the textbook in the U.S., which will be much easier than the experience*** I had for these classes…) Special thanks to Jon for all of his support. He did the bulk of house stuff, errands, etc. and I appreciate it so much.

**One of my courses had clicker questions during the recorded lectures where the professor would ask something and those in the in-person section would be able to answer, “Who Wants to Be a Millionaire?”-style. The problem with this was it was super boring while it was going on, sometimes with multiple re-votes so that more people could actually get the right answer and score points. Class: clickers. Me: New York Times/Twitter/WhatsApp.

***I won’t go into all of the shenanigans but, basically, buying a book here is dumb. Multiple calls, e-mails and a store visit later, I rented the Kindle version of the textbook from Amazon and called it a day.