Last weekend, we had our first visitors that came and spent the night. (We’ve had day visitors in Erin, Ben, Saeed, Stephen, etc. but they haven’t stayed over…) One of my best friends, Tim, and his girlfriend, Maty, traveled to Namibia and extended their layover so they could see our life here. We did a lot in 24 hours and are so happy they came!

The trip started with a pick-up at OR Tambo (the airport) and then we drove straight to Bosvelder, an Afrikaaner restaurant that had Amarula advertisements everywhere and hearty, hearty food. I really regret not asking them to take our picture because we sat right under a huge ‘elephant head’ on the wall, as part of an Amarula advertisement. We left full and happy. We then went to our place, showed them around and had a night cap before turning in. (We gave them our bedroom since our shipment hasn’t arrived yet and, thus, the second mattress does not yet exist. So Jon and I slept on an air mattress in our unheated guest bedroom. Note to self: additional heaters needed during winter.)

The next morning, we got up in a leisurely fashion, they packed up and we went to breakfast at Harrie’s Pancakes. It’s this great place that serves sweet and savory pancakes that are a cross between American pancakes and crepes. YUM. Then, Jon did a driving tour of Pretoria, showing them a few neighborhoods, the main parts of downtown and the Union Buildings where Mandela gave his famous inaugural address.

Tim & Maty, eating the dessert pancake we all ordered to share…

Then, we drove to Johannesburg and walked around a cool area called Meville, home to cute shops and restaurants, as well as an artsy shopping area called 27 Boxes, made of shipping crates. A funny moment happened when Jon and Tim wanted an espresso and a clothing store we were browsing in sold it. Jon ordered two and the guy said he didn’t know how to use the machine. So, Jon went behind the counter and showed him how to use it! (Meanwhile, Maty, who is Italian, looked horrified at what they were both doing. It was highly amusing, to say the least!) We then went to the Arts on Main market, which occurs on Sundays and is similar to the one we went to a few months ago, Neighborgoods. Lots of cool knick-knacks being sold, street performers jamming out, and a huge bevy of food vendors. Jon convinced Tim & Maty to try bunny chow, a South African delight and we found a small table in the corner to gobble our food up at. Once we were done, we went to listen to music at the outside bar and had some drinks to wrap up the day. It was delightful. 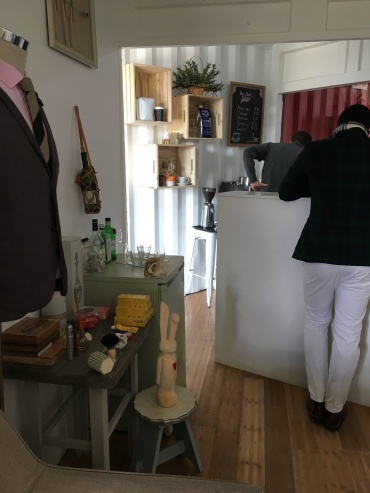 Jon, trying his best to show this poor guy how to make an espresso…

The other guy that worked at the store came to watch, too!

After the sun set, we knew things would be winding down (Sundays…) and we had a bit of time before they had to be at the airport so we went to Emperor’s Palace (the Caesar’s Palace of SA, I guess). We played some blackjack (came out ahead!) and Tim & Maty got to see a busy, popular African casino. We took them to the airport and sent them on their way, sad that it was already over. Bu it was so nice to have them here. Jon and I didn’t have a proper second bedroom in our loft in Durham (and we definitely didn’t have a second bathroom) so being able to set guests up well was fun… And we’re going to have a nice string of guests starting in September, so that room is going to get lots of use! (We’ve since ordered a mattress – since our shipment doesn’t seem like it’ll ever come – and have obtained another heater…)

So, come on down! (Tim & Maty, you better rate us well on TripAdvisor!)